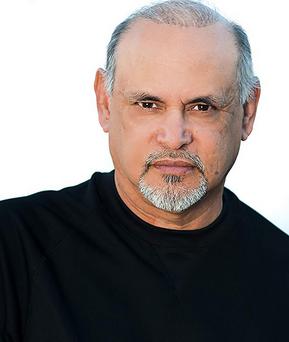 Enrique Castillo was born and raised in Calexico, California. His family of 7 lived on Blair Avenue where he attended elementary school in Calexico and graduated from Calexico High School in 1968. He worked the agricultural fields in the Imperial Valley along with his father on weekends and holidays. During the summer months, his family migrated north to continue working in the produce industry where he worked with his father into his sophomore year in college. After graduating from high school, Castillo enrolled at the University of California Berkeley where he graduated with a Bachelor of Arts degree in Performing Arts. Castillo is an award-winning actor/writer/director and author whose work spans theater, music, television, film, and literature. He received an Imagen Award for writing and directing the theatrical production Veteranos: A Legacy of Valor. He is well known for his stand-out role in Showtime's hit television series Weeds where he played the lethal Cesar for three seasons and was nominated for a SAG Ensemble Award. Castillo is most recognized for his film role of Montana in Taylor Hackford’s Blood In Blood Out where he played the inspirational (albeit terrifying) leader of the Mexican prison gang. When the film was released, The New York Times singled out Mr. Castillo’s performance in their review. “Mr. Chapa, Mr. Bratt, and Mr. Borrego are excellent, as are the members of the large supporting cast, notably Enrique Castillo, who appears as the leader of San Quentin's Chicanos.” In Japan, a film critic said of his performance as Montana, “He plays the role with the wisdom of Torquemada and the strength of a Sandinista warrior.” Castillo began his acting career with Luis Valdez’s El Teatro Campesino in 1969. As part of the theater group, he participated in workshops with world-renowned English director Peter Brook’s theater company that included now Academy Award-winner Helen Mirren. In the early 70’s Castillo traveled with Teatro Campesino to Paris, France where they represented the U.S. at the World Theater Festival. In 1969, Castillo made his television debut performing with El Teatro Campesino in the EMMY award-winning show Los Vendidos on NBC. Also in ’79, he performed lead roles in the Teatro’s production of Los Corridos that won a Los Angeles Drama Critics Award. In the early 70’s, Castillo founded the popular Latin music group in the San Jose area called Flor Del Pueblo. He was one of the vocalists and composed some of the group’s music. He would go on to produce their self-titled album Flor del Pueblo, and their signature song “Soy Del Pueblo” is included in the Smithsonian Folkways CD Rolas de Azlan: Songs of the Chicano Movement. In 1978 Castillo made the move to Hollywood. He was cast in the hit play Zoot Suit, also created and directed by Luis Valdez, where he played the lead role opposite Edward James Olmos. Since then he has appeared in over 50 television shows and feature films. He played the lead role in the short film Graffiti that was nominated for an Academy Award. His first feature film was acting opposite Charles Bronson in Borderline. Since then he has worked with such notable film directors as Tony Scott (Déjà Vu), Taylor Hackford (Blood In-Blood Out), Stephen Frears (The Hi-Lo Country), Wim Wenders (The End of Violence), Gregory Nava (My Family and El Norte), Oliver Stone (Nixon), Tim Burton (Mars Attacks), and Miguel Arteta (Beatriz at Dinner) starring Salma Hayek. In the mid 80’s Castillo was one of the founding members of the Latino Theater Company, where he played the lead in a variety of the company’s productions and was also a writer on two of the company’s plays, Stone Wedding and the multi-award-winning August 29. In the mid 90’s Castillo adapted, starred, and directed the award-winning play The Last Angry Brown Hat, written by Alfredo Ramos that toured to rave reviews for over four years across the country. He then wrote and directed Veteranos: A Legacy of Valor, a theater piece honoring the military contributions by Latinos in America’s defense that had two national tours to standing ovations and much critical acclaim. Veteranos was awarded special recognition by the Congressional Hispanic Caucus and received the prestigious Imagen Award for Best Live Theatrical Production in Los Angeles, California. On Memorial Day in May of 2015, Castillo restaged a condensed version of the play to standing ovations at the LULAC convention. Castillo has written various screenplays including For Lorenzo, Yo Solo (I Alone), The Cobra, Valley of The Dead, Deerdancer and the screen version of The Last Angry Brown Hat. He also co-wrote Operation Wildcat. Castillo’s debut novel, The Dead of Summer, is a suspense crime thriller that takes place along the US/Mexico border in the Imperial Valley. It is a tale of revenge, justice, and love with elements of the supernatural. At the core of the story is a glaring look at violence against women. The novel is available on Amazon as well as a Kindle version. He will soon be seen in the feature film The Green Ghost, and he currently can be seen in the films: In Other Words, Homebound, Love Kills and Beatriz at Dinner where he stars opposite Salma Hayek. Enrique Castillo is a member of the Academy of Motion Picture Arts and Sciences with voting privileges for the ACADEMY Awards.