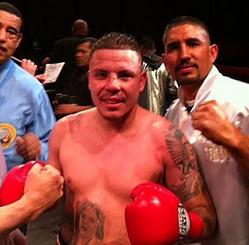 “Sweet” Jose Aguiniga reached a record of 33-0, and then he stopped fighting. Why would he end his boxing career with a record like that? Living in Oxnard, at that time, I had heard almost every rumor you can think of as to why he stopped fighting. It wasn’t until yesterday that I finally got a chance to ask him directly on my podcast. Shortly after, in a heartbroken way, he said he was finally able to say out loud for the first time, “I’m retired.”