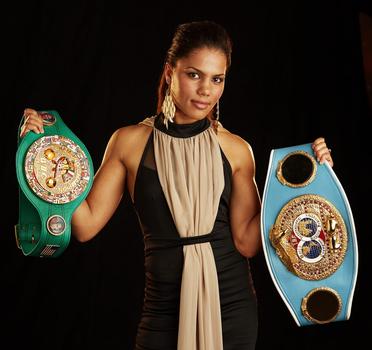 ​"The Lady of Boxing" Ava Knight​

Not too long ago Ava “The Lady of Boxing” Knight was considered one of the best female boxers in the world. In October 2012, she defeated the popular Mariana “La Barbie” Juarez for the WBC “Diamond” flyweight title in Juarez’s own home country of Mexico. After two title defenses, she lost the title a year later to Ibeth Zamora. During and after this fight, Knight along with other female fighters, were very vocal on social media over their frustration with the lack of opportunities for females in the sport of boxing. In the next two-and-a-half years, she only fought three times followed by a two year hiatus from the sport after her bout in April 2016. Since her return this July, she has fought two more times. All wins. Here’s a few question I threw at her fresh off her latest victory this past weekend …

TheBoxingBar.com : You seemed to have disappeared from the boxing scene for a bit from 2016 until this past summer. You just had your third fight and win in five months. What differences have you noticed in yourself since leaving your hometown of Chico, CA and training at the Mayweather Gym in Las Vegas?
Ava Knight : The difference is major. Las Vegas is a mechanic of fighting and many different people come there to train and fight and hopefully get picked up by a promoter. So with that, there is so much talent that comes in and out of Las Vegas. Chico is small and there were no fighters, especially after myself and my two gym mates left, and now they have fallen off. When I moved to Oakland for a few years, that was better than Chico, but I still had the same partners to spar and the same faces. It never got old but it was also harder to move around the bay to get work. So far, Las Vegas has been the best place for me to call home.

TBB : In the last 12 – 18 months or so we’ve seen women fighters, that are considered to be the best today, televised on top shows like Golden Boy, HBO, Showtime, ect.. Not too long ago you were considered to be the best and frustrated on how you didn't get that exposure. How have you seen the sport change toward women in the last few years? And how does that motivate you?
AK : The sport has been opening new doors for women and it is great to see. The amateurs that turned pro are getting good exposure and getting signed to the big promoters now which wasn’t happening when i turned pro. I’m very happy for the small changes we are seeing in boxing. We know boxing is an old sport and hasn’t embraced these new generations of young men and women who are showing out in the sport until now. As for motivation, it does nothing for me per say. I’ve been pro 10 years now. I’ve already fought the best that I considered at the time, which I still think is better than the crowd of ladies now. I am no longer a “prospect.” I know my career still can have a long successful path, but I have not let what has happened change my vision of what I need from this sport.

TBB : Recently the city of Paradise, next to your hometown of Chico, was destroyed by the biggest fire in California’s history. I know you haven’t forgot where you’re from. I now live in that area. What message do you have for your local fans and friends here?

AK : I raised a little money to help a few families and it has been hard to know that the fellow city of Paradise is gone. It’s a huge tragedy and I’m hoping that the families that were effected by the fire can recover and have a good holiday.

TBB : How ready were you going into this fight against Mayela Perez which you won comfortably via unanimous decision this past weekend in Las Vegas?

AK : I felt really good in this fight. Mayela is a tough girl who has been around a long time and fought the best girls in the last 10 years also. She has a pedigree of over 40 fights and is a real warrior. It was great to end the year with such a willing and hungry fighter. It felt great that after all these years fighting in Mexico, I am fighting them here in the states.

AK : Fight fans are going to see me come back to the top spot again. I have nothing to prove to anyone. I just want my throne back. I worked hard for this career even though I didn’t have too much of an amateur background. I made it to the top with some skill and a lot of heart. 2019 is going to be a busy year, and I am excited to see what Affiliation Management and Mayweather Promotions has in store for me!