Born June 1, 1934 on McKinley St. on the Eastside of Oxnard (La Colonia area), Frank “Panchito” Ontiveros was one of the first coaches and founders of Oxnard’s original boxing gym, La Colonia Boxing Club, before pro fighters trained there. Ontiveros was a well-respected “prison fighter” / amateur fighter during his time. He had several fights in some of California's most dangerous prisons such as San Quentin, Soledad, Norco, and Tracy. He was known for his stocky-frame, heavy hands, and all-out style of fighting often boxing against fighters that looked to be twice his size and at a higher weight class. Ontiveros was a real "boxing guy" with incredible knowledge about the sport from all his years and first-hand experiences in boxing. He passed away last August and is missed by all who knew and remember him. Rest in Peace Warrior!
*A special “Thank You” to his son Danny for sharing these pictures with us. (fight picture to the left is Ontiveros in a bout in San Quentin in 1955 or '56.) 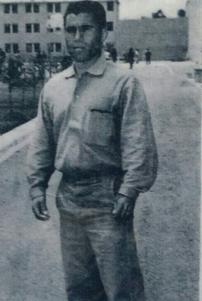